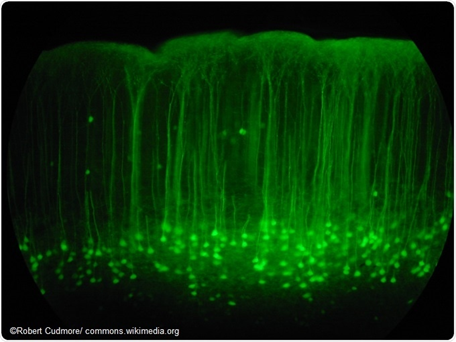 Protein labeling is an extremely useful process in many fields including biology, biotechnology, medicine, forensics, genetics, and more. In simple terms, protein labeling is the use of a ‘label’ to bind to a protein in one way or another so that it can be detected, monitored, analyzed, and even purified. Being able to label a target protein opens scientists up to a range of possibilities for interacting with a target protein and understanding the many complex processes that proteins perform in the body. While there are many different types of protein label and labeling techniques, this article focuses on protein labeling with fluorescent probes.

Protein labeling with fluorescent probes can be accomplished by linking cyanine dyes, rhodamine dyes, or fluorescein to cysteines, lysines, tyrosines, or the N-terminus of your target protein.

What Are Fluorescent Probes?

Take a look at this page from Nature about fluorescent probes. The absorbance and fluorescence of a fluorescent probe are dependent on a range of factors including its chemical structure, the solvent it is dissolved in, its binding target, and more. Fluorescent probes are mainly used in biological studies, but can also be used in other applications. This includes tracers, dyes and stains, indicators, and more.

What Types of Fluorescent Probes Are There for Protein Labeling?

Since there is so much diversity in proteins, it of course makes sense that there is a huge range of fluorescent probes available to choose from. Organic fluorescent dyes are the most common way of labeling proteins. They are excellent choices for protein labeling because they can be fine-tuned by changing their structure to make them more target-specific or to adjust their fluorescence.

These synthetic dyes contain conjugated polymethine chains with quaternary nitrogens as part of the system. Their fluorescent properties are easy to adjust depending on the functional groups and length of the conjugated chain. They often yield brighter and more stable fluorescence than alternative organic dyes. Here’s a great overview of cyanine dyes from Science Direct.

This family of dyes is mainly used for dying paper and as inks, but they also make excellent protein labels. They are high-performance dyes that are excellent for labeling antibodies in particular.

These fluorophores are formed from biological structures that can fluoresce. While they are often more expensive and time-consuming to use, they can be bound to proteins very effectively in specific cases and introduced into living cells, bacteria, or even entire organisms. Biological fluorophores have the advantage of being less likely to result in issues of toxicity by negatively affecting the proteins they are bound to. They can be made from other proteins, enzymes, antibodies, or other common biological structures that can be bound to a protein.

These relatively new fluorophores are significantly brighter and more stable than organic fluorescent dyes. They are tiny (nanometer scale) crystals made from semiconductors. Their fluorescence is linked to their size and shape, and they are exceptionally stable (one study reported quantum dots fluorescing for 4 months in vivo!). However, they are still novel technology and need more research. The main challenge with quantum dots is their toxicity. Since they are made from heavy metals and have high stability, they are potentially very toxic depending on a range of parameters such as their size, shape, composition, and more. They are powerful tools for protein labeling as they can be coated in different ways to optimize their binding.

Tips to Select A Fluorescent Probe for Protein Labeling

Proteins are large, complicated biological structures with potentially thousands of relevant functional groups and binding sites, as well as a specific 3D structure. This means that choosing the right fluorescent probe for your target protein is essential. However, there isn’t always literature on every protein and fluorophore, so you’ll have to do some experimentation to make sure you get the right fluorescent probe for the job.

1. Determine What Protein You Want to Label

This seems obvious but it’s the most important factor. You need to know exactly what you’re looking for, or there isn’t much point trying to label a protein. Are you targeting a specific family or protein? Or one particular protein? The more you know about your target, the easier it will be to choose a fluorescent probe. You’ll also need to analyze how to purify your recombinant protein with your fluorescent label.

2. Determine if Experimental Conditions Will Quench or Interfere With a Fluorophore

What are you trying to do once you’ve labeled your target protein? Monitoring intracellular protein processes in real-time might require a very stable fluorescent probe that has low toxicity. What if you’re trying to purify your target protein? That might open your options to include fluorescent probes that aren’t as long-lived but are brighter and will give you more precision.

3. Choose a Fluorophore That Binds Specifically to Your Target Protein

Your fluorophore needs to be specific in binding to your target protein. It’s no use to you if your label binds to various proteins that you aren’t interested in and gives you false readings. Worse yet, a poorly chosen fluorophore might bind to multiple proteins at once. We’ve discussed protein conjugation chemistry in detail in another article.

4. Find a Fluorophore That Can Be Detected Easily

5. Ensure That Your Fluorophore Is Stable in Your Experimental Conditions

Your fluorescent label of choice needs to be stable in your sample and when bound to your target protein. It will need to remain stable long enough for you to complete your experiment, but without it affecting the biological system you’re monitoring.

6. Minimize Interference Between Your Fluorophore and Other Fluorophores or Experiment Components

In many cases, your fluorescent probe needs to not interfere with the function of the protein, or the function of the biological system you’re monitoring the protein in. There’s no point labeling a protein if its function is completely impaired by the binding of your label. Worse yet, you won’t be able to monitor proteins in cells or other living organisms if your probe is so toxic that it kills them. When working with living samples, make sure to select a probe with suitable toxicity for the duration of your experiment.

Once you’ve labeled your protein with a fluorescent probe, there’s an amazing range of potential uses for your labeled protein. Proteins can be observed, quantified, and studied in great detail once you’ve attached a label.

To analyze your protein labeled with a fluorescent probe, you can use techniques such as fluorescent microscopy to quantify and monitor your target protein, flow cytometry to sort proteins, and even monitor living cells using fluorescent live-cell imaging with multiple labeled proteins.

Labeled proteins can be identified in cells and cellular components with exceptional specificity. Many uses extend from this. For example, the levels of proteins expressed in certain tissue can be quantified to understand the effects of a specific gene. Another example is the use of multiple fluorescent probes to monitor a protein and the components it interacts with to provide more detail about the mechanisms occurring within a cell. In medical diagnostics, cancer-specific proteins can be labeled to learn more about specific cancers. We’ve written about immunofluorescence microscopy in detail and discussed how to use antibodies attached to fluorescent probes.

Labeled proteins can be sorted and quantified in real-time as they pass through a light beam of detectors that measure their fluorescence. In medicine, this technique can be used to rapidly screen for medically relevant proteins. This technique is used in immunology (for example, antibodies), hematology (blood proteins and other markers), oncology (cancer-specific proteins as mentioned above), and even genetics (measuring gene expression by protein markers). Flow cytometry is a popular technique because it is relatively cheap and reliable. We’ve discussed the flow cytometry method and theory behind this technique here.

Labeled proteins are extremely useful in monitoring intracellular processes in real-time using time-lapse fluorescence microscopy. It provides insights into the life of a cell and the active processes within. As mentioned above, the use of multiple fluorescence probes can provide intricate details to the internal structure of a cell. However, a careful balance needs to be found between collecting enough data without producing phototoxic effects from overusing the fluorescent probes.

Where Can I Buy Fluorescent Probes?

Most major chemical suppliers sell specific fluorophores. Organic fluorescent dyes are the most commonly available types but now more unusual types like quantum dots are becoming available.  Many suppliers produce protein labeling kits that contain everything needed to complete the process in a short time. Some offer the ability to label up to 10 mg of protein.

Fluorescent probes can be bought from most life science suppliers such as Anaspec, ThermoFisher, and LiCor.

Here are some examples of protein labeling kits found on the market:

AnaTag 5 microscale protein labeling kits. These labeling kits use fluorescein isothiocyanate (FITC) as a fluorophore. The kit is suitable for biological applications and can label 3 x 200 ug of protein.

Alexa Fluor protein labeling kits from ThermoFisher. These kits offer a very straightforward way to covalently label 1 – 10 mg of protein with a fluorescent dye. They offer a range of dyes with a broad range of excitation and emission wavelengths.

LI-COR IR Dye protein labeling kits.  These kits are designed for labeling antibodies for use in flow cytometry where fluorophore-conjugated antibodies are required.

The most straightforward way to label a protein with a fluorescent probe is to use a protein labeling kit like those mentioned above. Most of these processes use a similar process to label the proteins. Below you’ll find the general steps that protein labeling kits like this one. They are very easy to use and require a small time investment.

You may also like our article on methionine selective bioconjugation to attach fluorophores at methionine residues.

Step 1. Add Your Protein Into a Vial With the Fluorophore and a Magnetic Stir Bar

Most kits come with a premeasured quantity of dye and vial for you to perform this step.

The kit will tell you how long you need to stir the reaction. Be careful not to stir too aggressively as some proteins are sensitive to agitation.

These are usually gravity-fed size exclusion columns that purify out your protein.

Collect your protein from the column. Now you can perform your experiments on the protein.

As you can see, the process is fairly simple and requires minimal effort as all of the equipment you need to label the protein is provided in the kit.