Before we do a deep dive into protein conjugation chemistry, let’s first describe what a conjugated protein is. In case that you are having issues understanding chemistry this igcse online chemistry tutor can help you out with your questions.

A conjugated protein is a protein to which another chemical group or molecule has been attached. Typically, covalent bonding interactions are used to conjugate molecules to proteins.

Proteins that contain only amino acids are generally referred to as free proteins.

Conjugated proteins can be attached to carbohydrates, lipids, organic complexes and may even have stabilized metal ions.

Conjugated proteins contain free proteins, as defined earlier, attached to molecules, called prosthetic groups.  When carbohydrates are bound to a protein, the protein is called a mucoprotein or glycoproteins (considered to be the most abundant and largest conjugated protein). Some categories of conjugated proteins also take the form of proteolipids or lipoprotein. Proteolipids have the tendency to behave typically like lipids and are quite soluble in organic solvents. Lipoproteins (lipids attached to a protein molecule) behave typically like a protein. The lipid inside a lipoprotein imparts a lower density to the protein; which means a lipoprotein has a relatively low physical weight.

You can also have Metalloproteins and Chromoproteins, which are other derivatives of conjugated proteins. A metalloprotein has a metal group specifically bound to an amino acid moiety. A chromoprotein is a colored protein composed of a protein and a chromophore (functionality that gives them color).

A typical metalloprotein called hemoprotein is represented below. Note the way the iron ion is bound.

Hemoglobin is a conjugated metalloprotein that binds iron. Image from ScienceDirect.

A closer look at all four bifunctional groups shows that they are also a part of amino acids, so they are easy to find on proteins. 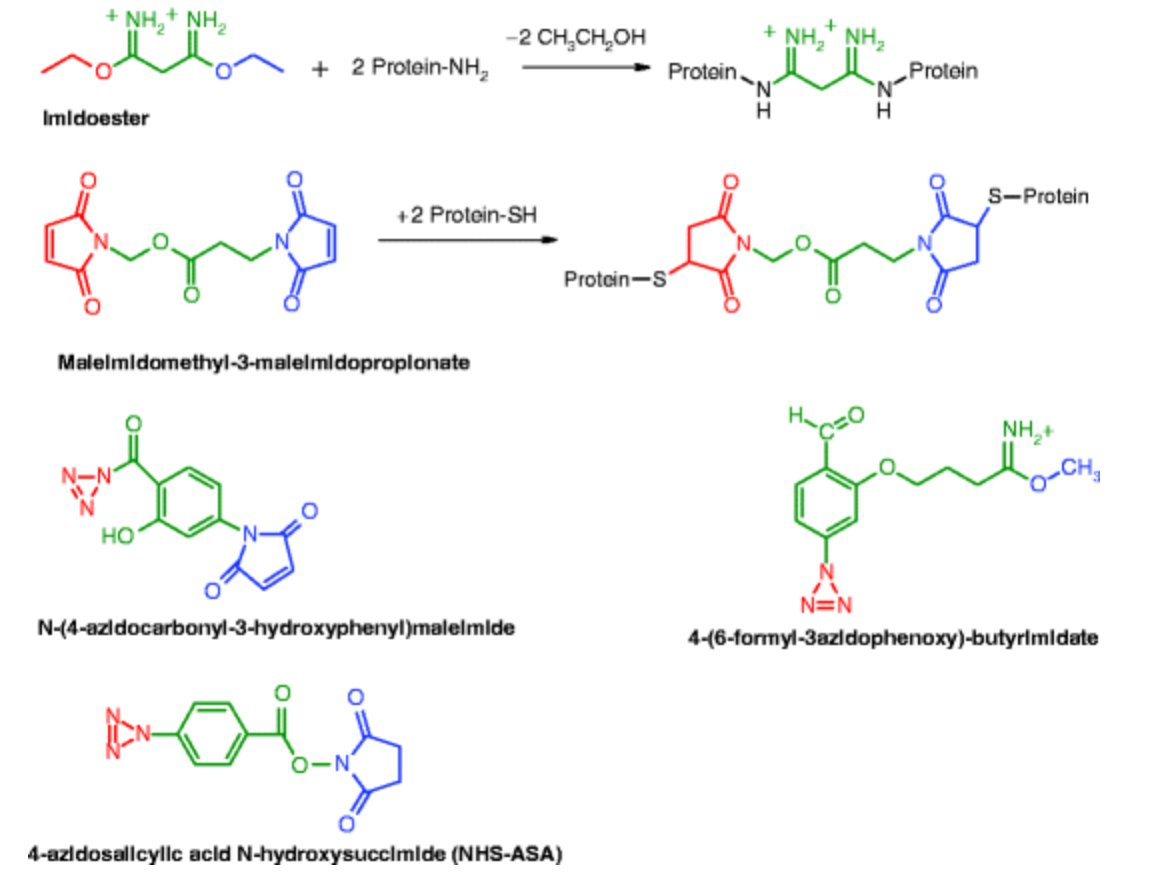 Some common homo and hetero bifunctional reagents for protein conjugation. Image from SpringerLink.

How to Use Bifunctional Reagents For Protein Conjugation

If you’re wondering how to utilize a bifunctional reagent for protein conjugation, in general you need to:

Here are more details on the above general steps.

Step 1. Determine A Target Moiety On Your Protein First

Amino acids on proteins consist of carboxyl groups and amino groups. Since proteins are linear polymers consisting of amino acids, one end of the protein will have an unconjugated carboxyl and the other end will have an unconjugated amine group. The carboxyl end is called the C-terminus and the amine end is called the N-terminus. Both of these ends can be conjugated to. Protein labeling with fluorescent probes is a common reason to utilize the N- and C- termini.

You can quantify the N-terminus along with any free amine groups in a protein by reacting the protein with fluorodinitrobenzene (FDNB) or dansyl chloride. The fluorodinitrobenzene (FDNB) or dansyl chloride will link with any free amine inside the protein. If you notice that there are a lot of amines, then consider using bifunctional linkers with at least one NHS group to react to the amines on the protein. See below for lysine conjugation chemistry.

Other viable target moieties on your protein could include thiols from cysteine residues or the C-terminus carboxyl group. See the image below for amino acids that are easy to react with.

Lysine, Aspartic Acid, Cysteine, and Glutamic Acid are good target moieties for protein conjugation reactions due to their amine and carboxyl side chains. Image from NEB.

Step 2. Determine a Target Chemical Moiety on Your Prosthetic Molecule

You need to determine which chemical moiety on your prosthetic molecule you will conjugate to the protein of interest using the bifunctional reagent.

The best moieties on your prosthetic molecule to bind to are amines, carboxyl groups, or sulfhydryls as we stated previously.

If you can install an azide, tetrazine, or alkyne on your prosthetic molecule, these groups can make your protein conjugation chemistry really easy.

If none of these groups are available on your prosthetic molecule, consider converting a hydroxyl to an aldehyde to make it more reactive.

Typically nanoparticles that are commercially purchased can include functionalized polymer surfaces that you can conjugate to proteins. We discuss protein and antibody bioconjugation to gold in our article.

Azide-alkyne ‘click’ chemistry is a common method utilized for protein conjugation chemistry. It’s considered ‘bioorthogonal’ because azides and alkynes are uncommon in proteins. Image from Royal Society of Chemistry.

Learn more about orthogonal bioconjugation techniques in our related article.

Step 3. Find a bifunctional reagent that can react with both chemical moieties

Bifunctional reagents are important in the protein conjugation process as we’ve discussed previously.

If the two groups from Step 1 and Step 2 above are different, you need to use a heterobifunctional reagent. Western blotting can be utilized to prove that your conjugation reactions yielded higher molecular weight results.

Bifunctional reagents are also really useful for attaching proteins and other molecules to surfaces.

After reacting with the protein, you can react to the other functional group on the bifunctional reagent to react with your prosthetic molecule.

Note that two steps are involved for heterobifunctional reagents in order to avoid polymerization or side linkage of functional groups.

Homobifunctional reagents can be utilized in one pot reactions containing both the protein and the prosthetic group or separately in two different conjugation reactions.

For site specific protein conjugation, researchers typically include unnatural amino acids inside their protein during expression. Cysteine groups could be used for site specific conjugation if only one disulfide bond is present in the protein and hence only those sulfhydryl groups are accessible to your bifunctional reagent.

Azids, ketones, and aldehyde can be coupled to a protein via bioorthogonal chemistry. Typically, bifunctional reagents utilized to conjugate to these won’t react with amines or carboxyls on the protein. Ketones and aldehydes can be reacted with aminooxy or hydrazide compounds to yield a very stable oxime or hydrazone linkage between the protein and the biomolecule.

Lysines are the most common targets for protein conjugation chemistry reactions. The amine on the lysine is essentially a nucleophile and reacts to amine-reactive chemicals such as N-hydroxysuccinimide (NHS) ester (these react via lysine acylation).

For successful Amine-NHS conjugation reactions, the pH of the reaction solution must be below 10.5, which is the pka of the ammonium group in lysine. This helps deprotonate the lysine groups. This means that the reaction should be carried out at ph around 8.5 to 9.0.

Bioconjugation strategies for lysine residues on proteins. Image from Nature.

You can react cysteines in proteins with maleimide groups as long as your buffer is in a pH between 6.0 and 7.0. A common approach is to reduce disulfide bonds in proteins first with DTT or TCEP and then to react with a maleimide-containing linker.

You must eliminate compounds that contain thiol groups, like dithiothreitol (DTT) and β-mercaptoethanol (BME, aka 2-mercaptoethanol), from the reaction because they tend to compete with thiol groups on proteins. For instance, if you utilized dithiothreitol (DTT) to reduce disulfides in a protein and open up the sulfhydryl groups, you would need to thoroughly remove the DTT using a desalting column before you start the maleimide reaction. Instead of DTT, consider using the disulfide-reducing agent TCEP which lacks thiols.

You can quench free maleimide left over after reacting your protein by adding free thiols. You can also check your conjugation reactions using our HPLC Step By Step guide.

There are several protein conjugation kits that are available. Here’s an example from Vector labs. However, you can also utilize the chemical reactions above to create protein conjugates.

The steps below show a typical example of conjugating to lysines on a protein, based on information from GBiosciences.