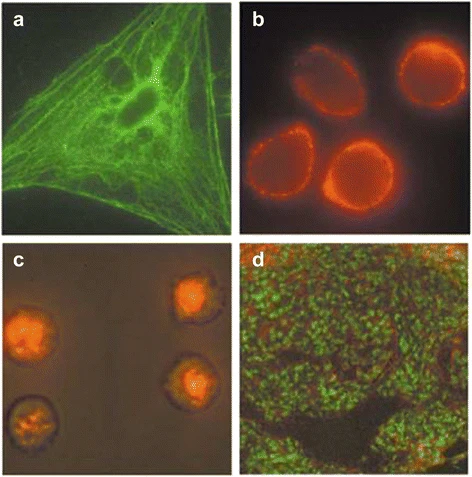 As material sciences continue to advance, the ability to tailor-make material surfaces with the desired functionalization presents new and exciting opportunities for bioconjugates. Surfaces from a range of materials including polymers, nanoparticles, and more can be conjugated to biomolecules such as proteins, DNA, carbohydrates, and more. Since both bioconjugation and material sciences are rapidly advancing fields, the overlap of the two has led to many advancements and applications in recent years. These hybrid materials are often seen in biotechnology, nanotechnology, and medicine. This article discusses bioconjugation to surfaces at a high level.

Bioconjugation to surfaces can be accomplished via EDC-NHS chemistry to amine containing surfaces. Polymers, glass, and nanomaterials can be modified to include amines on their surfaces for bioconjugation reactions.

Applications of Bioconjugation to Surfaces

With such a huge range of surfaces and biomolecules that can be conjugated, it’s no surprise that there are also countless applications for these materials. In the last decade, surface bioconjugates have gone beyond research and have reached industrial applications.

For example, many commercial techniques such as fluorescence imaging, EPR, and many other spectroscopy/microscopy experiments often use bioconjugate materials. In particular, the applications of polymers and nanoparticles have seen significant use due to their fascinating properties.

Applications of bioconjugation to surfaces include drug delivery, biosensors, and medical imaging.

The use of biomolecular therapy has seen notable growth in the last decade. Traditional drug development is often a slow process with a high failure rate. Meanwhile, protein therapeutics are seen as more benign and are often approved relatively quickly. However, biological therapeutics are readily broken down by the body so they are not as effective. This can be overcome by bioconjugation to a polymer to protect the protein.

Polyethylene glycol (PEG) can be attached to proteins to protect them from being broken down by the body before they can do their job and reduces or even prevents immune responses. Bioconjugation to a polymer surface also protects the protein from decomposition during storage as a result of heating/cooling. There are many comprehensive reviews of protein-polymer bioconjugate therapeutics.

Application 2. Biosensors Made With Surface Bioconjugates

The ability to conjugate a biomolecule to the surface of a nanoparticle opens up the potential for many different biosensors. The advancements in polymer chemistry have allowed for the specific functionalization of polymer surfaces so that they can be used to create specific bioconjugates.

For example, conducting polymers can be used to produce electrochemical biosensors to target specific biomolecules such as DNA. The authors managed to functionalize polyfluorene nanoparticles which were stable in a range of conditions to quickly detect DNA. They found that their method would be useful in medical diagnosis, gene therapy, and other biological studies.

Another interesting example was the production of a DNA-based polymer sensor for the detection of Bacillus Cereus, a bacterium that produces several highly active toxins. It is commonly found in liquid food products such as baby food, so the ability to rapidly detect it was highly sought after. The authors used polypyrrole to produce a single-strand DNA biosensor.

Quantum dots are a new type of nanomaterial that can be varied to fit a specific purpose depending on their functionalization. They are semiconducting nanoparticles that have interesting optical and electronic properties as well as high stability. They can be used as a fluorescent probe for imaging biomolecules because of their high stability. However, quantum dots can be highly toxic, which is less useful in imaging applications when you are monitoring a living organism.

As you can imagine, there are countless types of surfaces that can be used for conjugation to biomolecules. With that in mind, for a successful bioconjugation, the surface of the material needs to be appropriately functionalized. This can be achieved during the synthesis of the material or afterward by making post-modifications to the surface.

Polymers can be used for bioconjugation reactions due to their versatile properties and a high potential for functionalization. They give easy access to the benefits of both synthetic and natural materials. Polymers have been conjugated to a range of biomolecules including proteins and peptides, nucleic acids, carbohydrates, lipids, and even live cells. One of the most commonly used techniques for polymer bioconjugation uses N-hydroxysuccinimide (NHS) chemistry which requires polymers functionalized with carboxyl acid groups attaching to biomolecules with amine functional groups.

Nanomaterials have seen a significant amount of research for biological applications, including their bioconjugates. Like polymers, nanoparticles are highly versatile and can be easily modified for a specific purpose. Most nanoparticles used for bioconjugation in a commercial environment are used in imaging applications such as fluorescence microscopy and various spectroscopic techniques. They often use NHS chemistry but other commercial methods include the use of amine or sulfur functionalized nanoparticles.

As mentioned above, the surfaces used for bioconjugation are flexible and can be easily modified to fit a specific purpose. Here are a few examples of techniques used to produce those functionalized surfaces:

Method 1. NHS-Functionalization of a Polymer

A polymer can be functionalized with NHS groups by reacting a carboxylic acid functional polymer with NHS in a weak organic base. The reaction is relatively simple and the product is stable in an anhydrous solution. This method uses triphosgene to rapidly synthesize the ester in mild conditions.

Step 1. Select a polymer with carboxylic acid functional groups on the surface.

Step 2. Add your polymer to anhydrous DCM, then add triphosgene and triethylamine.

Make sure you add the reagents slowly and that your DCM is anhydrous.

Step 3. Add NHS to the reaction mixture and stir.

The reaction only needs to be stirred for 30 minutes at room temperature.

Your polymer can be collected by suction filtration and allowed to air dry. It should be stored in an airtight and moisture-free container.

This method was used in the production of a new class of chemical microchips consistently of glass microscope slides. Here’s the method that the authors used to functionalize their glass with amine groups. Check out the paper to see the further steps they took after that.

Glass slides often have residual chemicals from their production. Clean them using NaOH, HCl, and then HNO3. Let them dry overnight under a vacuum.

Step 2. Dip the glass slides in a 2% solution of APTES in dry toluene.

The toluene must be completely dry. Add molecular sieves or NaSO4 to ensure it is completely water-free.

Step 3. Wash your slides with DCM and dry them in N2.

Your slides need to be washed with anhydrous DCM and dried in an N2 atmosphere.

After this, your glass slides will be surface functionalized with amine groups for future experiments.

Bioconjugation of Antibodies to Surfaces

In immune studies, antibodies are often monitored in various ways to learn more about their structure and activity. In some cases, the best way to learn more about an antibody is to conjugate it to a surface so that it is fixed in place. Then it can be more easily studied, for example, by imaging techniques such as fluorescence microscopy. Antibodies are often coupled with gold nanoparticles.

Early studies on bioconjugation to surfaces were often non-specific. Lysine residues are often found on the surfaces of proteins in great numbers, so bioconjugation reactions that link to lysines could effectively bind a protein in a non-specific way. Lysine is a popular target due to its abundance and the fact that there are many successful reactions available for bioconjugation reactions. This is mainly in situations where selectivity is less important than reactivity. Here’s an example of lysine conjugated silver nanoparticles which appear to have potential as a method for drug delivery.

Bioconjugation of DNA to Surfaces

As discussed in the example above, there are many methods for bioconjugation of DNA to surfaces. The importance of DNA is obvious, so being able to fix it to a surface material opens up the possibility for new biomaterials, sensors, assays, and more. There have also been some studies that suggest that DNA-functionalized nanoparticles can be powerful tools in creating new drug delivery systems.

Bioconjugation of DNA to surfaces can be achieved by including DNA in the synthesis of the surfaces, such as with nanoparticles. DNA can also be reacted with functional groups on a surface to tether them to it.